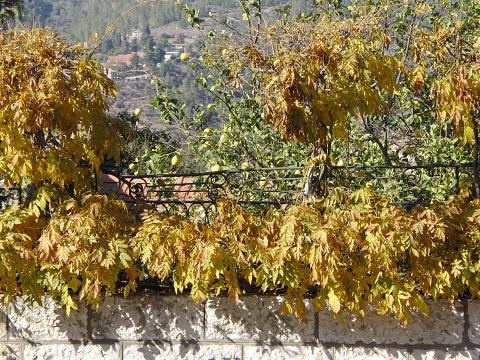 Wisteria and lemons in the late fall, Jerusalem, Israel

When will the geulah (redemption) come? According to many religious Jews it will come when the entire nation of Israel starts putting on tefillin (phylacteries) every day.

I have a slightly different perspective on the issue. I believe that the geulah will come only when the entire nation of Israel stops putting on tefillin every day. Let me explain what I mean.

The impetus for this mailing comes from a verse I found in King Solomon's Song of Songs when I was on an airplane travelling to New York. Though I had seen various verses brought by Karaite scholars as proof texts against tefillin, (Karaites do not wear tefillin and consider them to be an invention of the Pharisees), I did not remember seeing this one. (As it turns out, this was one of the common verses quoted, but I did not realize it at the time, so it was nice to have my own Karaite "hidush", short-lived as it was.) The verse is as follows:

"Who is this who comes up from the wilderness, leaning upon her beloved? Under the apple tree I awakened you, there your mother was in travail with you, there she was in travail with you and gave birth to you. Place me as a seal upon your heart, as a seal upon your arm, because love is more powerful than death, jealousy is as cruel as the sheol (grave). ..." [Song of Songs 8:5-6]

Here, the female lover implores her male lover to "place her as a seal upon his heart and arm." Obviously, the statement is not meant to be taken literally, since such a request taken at face value would be non-sensical. Rather, this is a figure of speech meaning something along the lines of "don't ever forget me" or "keep my soul connected to your soul at all times."

This, as well as other verses in the Tanakh, some of which I have listed below, imply that expressions of the sort, "tie, bind or write something on such-and-such part of the body," are not generally intended to be understood literally. Rather, this type of expression was a common figure of speech in ancient Israel. Here are some verses to support this claim: 1

Obviously, none of these verses are meant to be taken literally, or Rabbinical Jews would now all be wearing heart, throat and finger tefillin in addition to their arm and head tefillin.

Even verses in the "Shema" itself, the supposed source for phylacteries, imply that this type of expression was a common figure of speech in ancient Hebrew:

So, for the Rabbis to be consistent, they should not only be wearing arm and head tefillin, but also heart tefillin, and perhaps even soul tefillin!

The obvious conclusion is that these verses of the "Shema" are not at all meant to be taken literally. In fact, note how similar the above verses from Deuteronomy are to the verses brought earlier from Proverbs, Jeremiah and Song of Songs. This was simply a common figure of speech in ancient times. There is no implication whatsoever in these verses of strapping black leather boxes to your body.

So if the verses of the "Shema" do not imply tefillin, then what do they mean? In my opinion, the meaning is clear: Yehowah is telling us that we should be intricately connected to his commandments at all times, i.e., our entire lives should be surrounded by Torah.

Possible Sources of the Rabbinical Interpretations

So back to my opening statement. Why will the Nation of Israel only reach the geulah when we stop putting on tefillin: because it is only when we as a nation decide to reject the false understandings of galuth (exile) Judaism and return to a truer form of the Torah of Yehowah that the nation will be able to approach redemption.

In Leviticus 26 ("The Blessing and the Curse"), we are told (as opposed to the standard party line preached in Orthodox circles) that we must reject the ways of our fathers in order for the geulah to come:

"You shall be destroyed among the nations, the land of your enemies shall devour you. And of those of you who remain shall wallow away in their sins, in the lands of your enemies, and they shall also wallow away in the sins of their fathers. And they shall confess their sins and the sins of their fathers, in the trespass with which they trespassed against me, and in the fact that they deliberately went against me. ... And I will remember my covenant with Yaaqov and also my covenant with Yizhaq and also my covenant with Avraham will I remember, and I will remember the land." [Leviticus 26:38-42]

In other words, for the geulah to come, we must cast off our fathers' ways, not embrace them! The desire by so many Jews to "cling to tradition" is merely another excuse to continue in the sinful ways of their fathers, which they enjoy so much. In fact, one of the insights that recently came to me about Rabbinical Judaism is that it is largely a doctrine developed in such a way as to allow Jews to feel as if they are following Torah while in fact permitting them to continue in the same sins which brought the exile in the first place. (More on this insight in another article.)

My prayer is that, starting tomorrow, you will stop putting on tefillin.

This Article Has 5 Comments

Shalom, I would like to make one point, I do agree with a Tanach-based Judaism or biblical Judaism, but with a strict obedience to the commandments found therein as Moshe commanded. I also agree with not following Rabbinical literature for guidance, although, I do not think they are wrong on everything, just most things. You mentioned that the tefillin was an invention of the Pharisees, but very ancient tefillin has been found among the Essenes which were a sect completely outside of the Pharisees. (But still existed in the Second Temple period and had contact with the Pharisees. -ed) Here is one website which has pictures of ancient tefillin that are not from the Pharisees (http://ancientjudaism.homestead.com/Tefillin-information.html). The tefillin commandments do not read as metaphorical commandments, take for instance the mezzuzah, how can we not take the commandment literally that says "write the commands upon your doorposts and gates"? The purpose of this is so we see the mezzuzot and obey the commandment, lest we forget them. How strictly do Karaites keep the shabbat? The Tanakh dictates that one is not allowed to buy anything from anyone on Shabbat or any holy day (Amos 8, Nehemiah 10). This would include buying power, etc. to run utilities and would be illegal according to the Tanakh. Well, thank you for your time. Shalom
4

I fail to see the wrongness of Tefillin. I don't see it as an amulet. Though I do realize that Rabbinic Judaism is full of superstition and error such as Astrology and erroneous teachings. But does this make it wrong to symbolize Torah this way. Obviously we cannot tie the Torah literally on the heart but we can tie it literally on arm. Would appreciate your response. I do enjoy your site it is new to me. Doovid
3

Weren't the pre-exile Israelites mainly guilty of idolatry? Can adding to the law be that bad?
2

Tefillin when worn properly on the left arm comes very close to the heart.
1

Im suprised no one has commented yet. I must admit it took me a long time before putting my Teffilin away for 20 years now. I personally have a mystical inclination which is part and parcel of my Neshama. My wife as well, we hear each other when our lips dont move, and then only squabble over who said it out loud first. I have been zoceh to things that I couldnt begin to describe, I guess along the lines of the Bat Kol, but im firmly rooted in the earth. I dont practice any of the Miztvos in chutz because its nonsense that people pay money for lulav and etrogs, but there is shlosh regalim in force to observe it, but I cant shect a lamb if I had one as a sacrfice because Im only allowed that in Yerushalyim in the Mikdash, but somehow Succot I can go ahead and pretend play at all that. It was reading Lawrence Schiffman and other scholars of 2nd Temple Judaism that brought me to new conclusions. You are right. Not to cast aspersions but they are to the Charedi as the Koran is to the Mullah. Say something against them and be assured of a most unpleasant reaction. I think its funny that all our lost tribes or lost communities if you will, from Ethiopia to India and even to China, all know the Torah, but none of them put on Teffilin nor has anything relating to them been passed down generation to generation. I have no doubt that the Samaritans would be wearing Tefillin if it was more then just a late sectarian practice, in fact on one religous board a Orthdox Poster quoted a sefer of a Chacham in the middle ages that spoke of how Jews barely wore teffilin in his day. Im suprised he wasnt banned for being honest. Well thats my few thoughts at the moment. Keep writing.